Often appearing in the middle or at the end of a story, a twist can completely transform the reading experience into a wild ride where anything can happen. 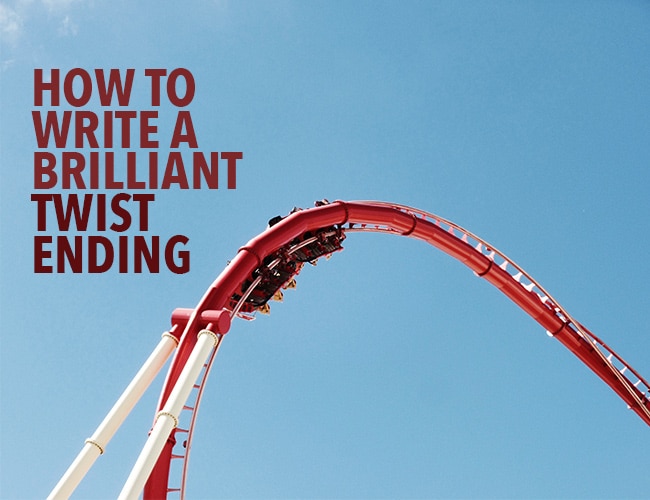 But executing a twist isn’t easy, and if done improperly, can leave your reader feeling deeply disappointed.

And that’s just what many writers unsuspectingly do.

The Wrong Kind of Twist

A “twist” is the revelation of crucial information that radically changes the reader’s understanding of the story. And to work properly, the twist must be related to a major choice made by the protagonist.

Many writers fail to make this connection. Rather, they think that a twist ending simply needs to withhold any important background information until the end of the story. And then, upon revealing it, they will somehow have reached a surprising and satisfying ending.

But this isn’t the case.

I found this to be true as a judge of the 2017 Fall Writing Contest, hosted by The Write Practice. The theme, “Let’s Fall in Love,” yielded many stories where characters simply “remembered” things that happened long ago. Perhaps they were visiting a cemetery where a loved one was buried, or a residence from childhood. The memories came back, and bits of information were revealed throughout the 1,500 word allotment. Then the story was over.

Sure, surprising information appeared here and there, but it didn’t arrive in the context of choice.

The revelation of surprising information is not climactic action. Information doesn’t do anything; it just explains.

Yet when that information accompanies a surprising, climactic choice, it enhances the complexity of the choice.

A bad twist is information posing as a choice. But a great twist reveals a choice that the reader usually can’t see coming, and why it is so impactful.

That’s the kind of twist you want.

“The revelation of surprising information is not climactic action. But when it accompanies a surprising, climactic choice, it enhances an amazing twist.Tweet thisTweet The Right Kind of Twist

The best twists focus on Choice, and reveal one or two things:

The heart-wrenching song “When Somebody Loved Me” is a slow, painful twist that reveals the seemingly contradictory choice that Jessie the Cowgirl is making: to go to a museum, rather than entrust herself to another owner. Why? Because despite the nature of a toy (to be loved by a child), Jessie has been deeply wounded by her previous owner, and is too scared to make herself vulnerable again.

Tell me that scene didn’t rip your heart out!

Or think of The Shawshank Redemption. The protagonist, Andy, has been making a very important (and methodical) choice during his 19 years in prison. The twist reveals it, completely changing the characters’ (and the viewer’s) understanding of Andy’s choices throughout the whole story. His secret choice has been contradicting his visible choices the whole time.

Tell me that moment didn’t change your life!

Both of these twists accompany and complicate a major choice made by a character. They also reveal something contradictory about the character’s nature.

That’s the stuff of a powerful twist!

How to Write a Great Twist

Executing a powerful twist ending isn’t easy. It takes lots of planning, drafting, and revising. And it won’t always work the way you expect. Here’s how to do it:

When you outline and draft, focus on the big, high-risk choices your characters can make. Experiment with a variety of choices, some that are outside your plan or even your comfort zone.

And as your characters solidify in the world of your story, focus on one to two choices that will truly surprise your reader. Hone in on choices that seem to contradict outward appearances or add deeply empathetic context to their difficult choices.

Unless you’re in the Mystery genre, try not to keep secrets. Sure, be intentional and sparse with your exposition, but don’t buy into the lie that secret background information qualifies as a satisfying twist.

In fact, you should write versions of scenes where you intentionally reveal crucial information (those would-be secrets)! You may find that the scene works better with the truth on the table. It will certainly force you to focus more on character choice, rather than character backstory!

And even in the Mystery/Thriller genres, the best secrets are tied to choices as well. Usually these big secrets are wrapped up in lies, which qualify as character choices — especially when you show them in action.

Keep the focus on choice, and you’ll find yourself in a great position to start executing a twist.

3. Wait Until the Perfect Moment

The best way to identify the perfect moment is to answer this question: “When are the stakes the highest?”

It’s at that moment that you should unleash your twist, as it complicates the high-risk choices made by your character.

I relished the opportunity to do this when I wrote a murder-mystery play. After the “false” ending, just when the characters and audience believe that the evil has passed, the killer reveals his true nature in a deeply personal and shocking way, murdering someone very close to him. It altered every choice the audience had seen him make for nearly two hours, and was even a complicated choice in and of itself, motivated by anger and a thirst for revenge.

But it took a ton of planning, drafting, and revising to finally get right!

A great twist ending is worth the effort. It sits atop the storyteller’s Mt. Olympus, right alongside eliciting a full-bellied laugh from your reader, or a puffy-cheeked cry.

Few stories are able to deliver it in a deeply satisfying way. Will yours?

Remember: These take lots of practice. You’ll hardly ever get a perfect twist right on the first or second, or even third, try.

But it’s totally worth it. For many of us, great storytelling twists motivate us to tell our own stories. We long to recreate the catharsis of an unpredictable twist.

So do it right. Focus on choices, and the seemingly contradictory reasons why characters make them. Don’t simply hide backstory, but use it to complicate the difficult decisions every character has to make.

So write on, fearless storyteller! And have fun planning and writing great twists that will thrill your readers every time!

What are your favorite twist endings? How do you surprise your readers with a brilliant twist? Let us know in the comments.

Since it takes much more than fifteen minutes to plan, draft, and finalize a good twist, take this time to carefully study a successful example. Take fifteen minutes to write a reflection on a twist from one of your favorite books, films, or plays.

When you’re done, share your practice in the comments below, and be sure to leave feedback for your fellow writers as we all learn together!

The post How to Write a Brilliant Twist Ending appeared first on The Write Practice.

As more retailers sell online, intruders are capitalizing on the rise in online shopping with increasingly sophisticated methods of stealing data. A study by NuData, a Mastercard company, sanctions how intruders are becoming progressively more sophisticated in their tricks as retail occupations displacement online. In the’ 2020 H2: Fraud and Risk at a Glance’ report, […]

These Celebrities Have Been Branded As Anti-Vaxxers

Let’s face it- the coronavirus pandemic has changed everything. COVID-1 9 has interrupted “peoples lives” like ever been, and beings are requesting for life to go back to regular. And that’s exactly what’s going to happen now that inoculations are ready. Despite this amazing breakthrough, there were many people in the world who are against […]

Diversity and Inclusion in the Workplace: Benefits and Challenges

Let’s face it. The positive impact of diversity and inclusion is no longer debatable. According to Deloitte, diverse corporations experience 2. 3 times higher cash flow per hire. Gartner found that inclusive crews improve team performance by up to 30 percent in high-diversity environments. In a BCG study, companies with diverse conduct crews had a […]